God is not a Republican! God is not a Democrat!
But I know that He's pro Life and I know He's pro traditional marriage!

(Psalm 139:13, Matt 18:10, Romans chapter 1, 2 Cor 13:5, Jer 1:5, Luke 1:42-45 )
Were the teachings of Jesus Socialist or Communist? Click here for the answer
I often hear people say something like, "When I meet God I will tell Him, 'blah, blah, blah.' " I know that when I meet God, face to face on judgment day, my jaw will drop to the floor and I will be speechless. When I stand before the one who was pierced for my transgressions and bruised for my iniquities, all excuses will flee from me and I will know that the only way I will enter into His kingdom is through the blood of the Lamb! (Isa 6, Isa 53:5, Rev 12:11)
Paul D Ellingsen


You can listen to us on Jango radio, Last FM, Rhapsody, Napster, Spotify, and Media Net, just type Cece and Me, PBforJ, or Paul Ellingsen into the artist search.
You can also buy our ringtones from Verizon.

Important Notice:
If you have a "No Hope But for Jesus" CD that has a lot of scatchy noise on some of the tracks send me the CD (just the CD not the jewel case or the art work) and I will send you a new remastered edition no charge. Sorry!
Send to:
Paul Ellingsen
14N582 Bonnie Lane
Elgin IL 60124

Our Semi-regular Engagements:
We often lead worship at the 6PM Sunday evening service at the Overflowing Cup Coffeehouse in Beloit, WI. 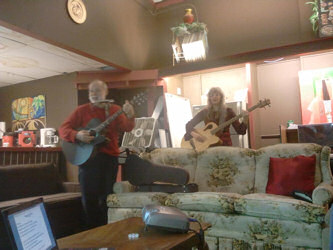 Sometimes we lead, sometimes Dave leads, sometimes we both lead, then Dave usually brings a message. Come out and join us sometime it's lots of fun!


We also often play at our own living room coffeehouse the 3rd Saturdays of Jan through October in Elgin, IL. 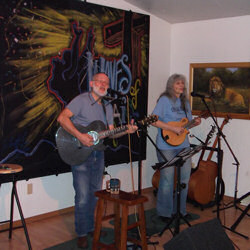 We'll be Playing at:
Praise Jesus Coffeehouse  will have an open mic Jan 19th. We will probably do a few songs and Rick and Linda Carney will be doing 3 songs as well. www.PraiseJesusCoffeehouse.org

We are working on a new CD that I hope to finish this year!
Possibly two. One of just instrumentals. 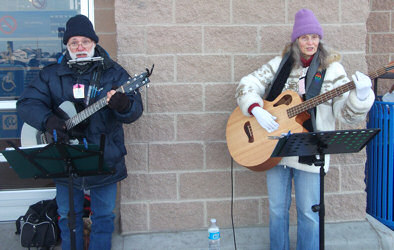 We played Christmas Carols in front of the Elgin Walmart for the Salvation Army Dec. 22nd, 2012.
After we were done we packed up and drove over to the Nite Light Cafe Christmas party in Berwyn, IL.
Sherry joined us and sang some rather good harmonies. I still had my long underwear on so after a while I got rather warm and took off my flannel shirt. So please excuse me for playing in my underwear. 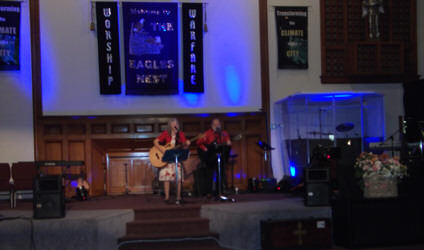 We played Christmas Carols for the Light and Life Christmas Gathering at Family Life Church in Elgin, IL Dec. 9th, 2012.

We also Played Christmas Carols in front of the Villa Park WalMart for the Salvation Army Nov 23rd 2012
We play often play Wednesdays at the open mic at the Sam Ash Music store in Lombard. Believe it or not they actually pay you to play at their open mic with a $10.00 gift card. All music must be original. 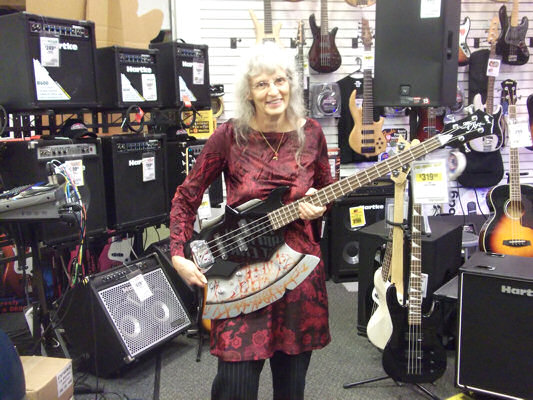 We looked at this bass for Cece but decided people might look at us a little differently when we sang, "Power in the Blood." 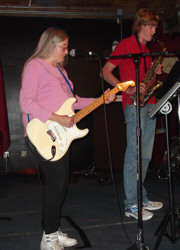 Darlene and Kyle from God's Workers.


Cece and Me
played Oct 6th at the
We usually get a motel and stay overnight so that we can go to their Sunday morning service. 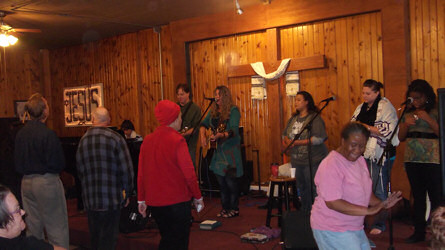 That's Bonnie in the green leading the worship.
We played at Love Elgin Day Sept. 29th, 2012

We played at the "Walk for Moms and Babies Sept. 22nd, 2012
held by TLC Precnancy Services at Discovery Church and Festival Park in Elgin, IL.
Thank you Stu Eckhaus for sending me these pictures.

We played at the Impact stage of Cornerstone 2012.
(The last Connerstone)
Please pause the video player at the top of the page before playing this you tube video or they will both be playing at the same time.

We also played at the Arkansas Stage for the last year of Cornerstone Festival.
(Thank you Faith, for taking all these wonderful pictures)

We saw several other old friends at Cornerstone this year too!
"Desiring Dead Flesh", was there again
"So then they that are in the flesh cannot please God." Rom 8:8 KJV


Aracely who has played at the "Praise Jesus Coffeehouse" www.PraiseJesusCoffeehouse.org was also there and it was enjoyable to hear Scott Playing backup. 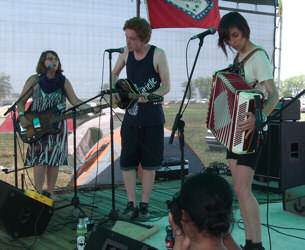 A newer group (and much younger than us) that we enjoyed was "Patchwork" Playing on the Arkansas Stage.

We played at the Overflowing Cup Coffeehouse in Beloit, WI June 23rd, 2012 and Melissa was kind enough to take all of these pictures.
Here is some of the audience.


Briensburg United Methodist Church Briensburg KY May 27th 2012
Thank you Pastor Bill, for inviting us and thank you Cheryl, for taking these pictures!

We lead worship most Sunday evenings at 6PM at the Overflowing Cup in Beloit Wi
www.overflowingcup.org 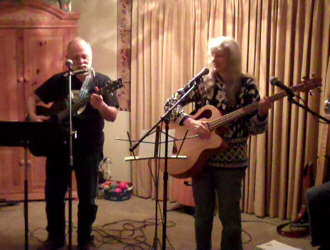 Cece and Me at the Second Saturday Sing March 10th 2012 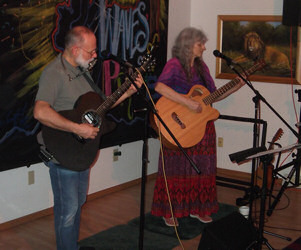 We played at our own Coffeehouse www.PraiseJesusCoffeehouse.org Feb 18th 2012.


Praise Jesus Coffeehouse Jan 21st 2012
We sang at the open mic at our coffeehouse (PraiseJesusCoffeehouse.org). Julio and Leonard from the Second Saturday Sing also performed. 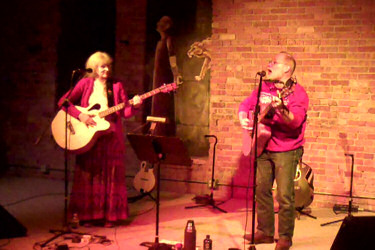